Past events by year

You can also view previous performances on our YouTube channel and check out what we have done in past years below.

Programme to include:
Broadway Musical Magic
Bob Chillcott’s “Singing by Numbers”
Sea Shanties
Rhythm of Life
Over the Rainbow
Blame it on the Boogie
Anthem from Chess

This event was a great success with the customers of the Wych Elm, with the pub packed out to the rafters. 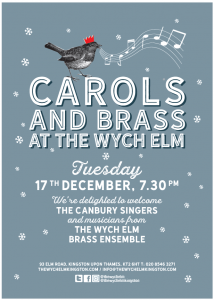 We sang Carols for the customers of the Canbury Arms for an hour from 6.30pm as part of their Christmas Celebration

This concert showcased the best that English choral composers have to offer and was performed in conjunction with the choir of Coombe Girls’ School.

It also saw the World Premiere of Adam Hope’s Song of Parting, composed for the Canbury Singers.

John Rutter’s “Feel The Spirit” compilation and other American Spiriturals and Modern music.

This concert saw us perform Rutter’s whole work of 7 movements, alongside other well-know American Spirituals and Modern music in a central Kingston Location.

Reading A440 performed with us back  in 2017 and the concert showcased the progress of both choirs as well as a couple of joint pieces that enthralled the audience.

The concert was followed by a Barn Dance in the Cornerstone building next to the Church which was a huge success.

Our way of giving back to the wonderful church who is so supportive over the year. The annual  carol service at St Luke’s Church on Gibbon’s Road in north Kingston. T

Wednesday 5 December – Together at Christmas

In honour of the 100th anniversary of Armistice Day, we performed Karl Jenkins’ The Armed Man. It would not have been possible without our soloists  – Stephanie Foster and Titu Joseph – the orchestral musicians, and our very own accompanist, Alex Knight, on the church organ.

Additional thanks to Coombe Girls’ School and the South London Military Wives Choir, who added to the musical tributes.

29 April at our home venue, St Luke’s Church in north Kingston. We were joined by the South London Military Wives Choir.

Our regular Christmas Carol service at  St Luke’s Church. It”s definitely one of the highlights of our year.

Delighted to have taken part in raising funds for Health Poverty Action at Richmond station this Christmas.

Carol’s at the Bentalls Centre. A fun evening of classics.

May Musical – with Canbury Singer and A440 – St Luke’s Church, Kingston upon Thames

Watch and listen to the performance on our YouTube channel.

Saturday 27th April 2013 at 19:30
Spring Musical Evening at St. Paul’s Church
Click on the image to the left to see further details of this amazing concert.

Saturday 8th December 2012 at 18:00
Singing It Back Christmas Concert 2012 at All Saints Church, Kingston
Click here to see the poster for this event

Saturday 24th November 2012 from 10:00
Christmas Market at the Canbury Arms

The Canbury Singers made a festive appearance at the Canbury Arms’ annual Christmas market on 24th November. In what has become a yearly tradition, the pub opened its doors to a selection of stalls showcasing local produce, and the Singers provided a musical backdrop to proceedings. From traditional carols including Ding Dong Merrily On High to the old favourite Frosty The Snowman, all ages were encouraged to get into the Christmas spirit. The theme was “Christmas sparkle” and it seemed to have spread to the audience as well! The Canbury Singers love their Christmas programme and are big fans of the Canbury Arms, so this is always a highlight of their calendar.